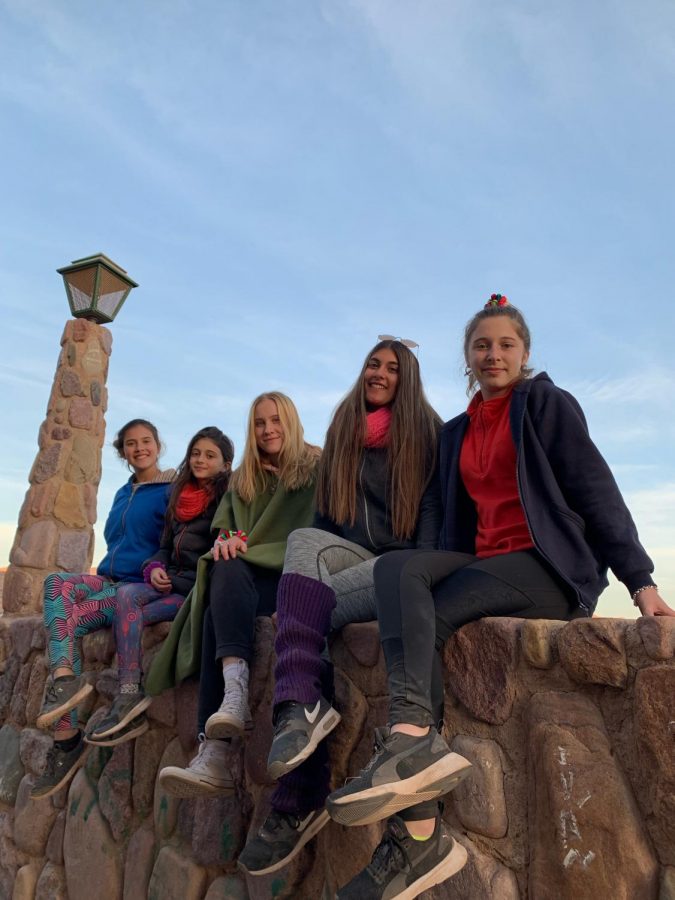 Sophie Fenton, middle, and her friends enjoy a fun day of exploring the city. They visited Jujuy on vacation late July of 2019.

By Sophie Fenton, Editor in Chief

When I first arrived in Argentina, I was overwhelmed, confused, and intimidated by all of the differences present in the culture. The language barrier was by far the hardest to approach, but it was smaller everyday things that made the experience so foregin. But, I wasn’t going to let minor things interfere with my adaptation and appreciation for the different culture I was immersed in.

Similarly, right now times are changing… and fast. It feels as though every day presents a new challenge, continuously shifting our focus. Since the beginning of quarantine all the way back in March, many have noticed an enormous shift, not only in their personal lives, but in society as a whole. This goes much deeper than the pandemic though, as we are in the midst of a cultural change, resulting in culture shock.

As a foreign exchange student who has traveled to Argentina for three months back in the summer of 2019, I have gone through extensive training on how to deal with culture shock. I believe that the shifts I experienced while abroad are parallel to what many of us are experiencing in the times of COVID.

IB Anthropology teacher Tammy Hodgson defines culture shock as “a feeling of disorientation experienced by someone who is suddenly subjected to an unfamiliar culture or way of life.”

It is safe to say that nearly everyone in the Tigard community has experienced this shift. Life now is not the same as it was prior to March. Since this culture shock reaches everybody, it is important to recognize the ways in which it affects us.

“You’ll see students withdrawing as maybe they’re not comfortable yet interacting within the culture,” Hodgson said. “It can also lead to not eating, sleeplessness and a sense of anxiety.”

Much of the damage of culture shock resides in individuals mental and emotional health and may be very harmful. This extends to questions about an individual’s identity and questioning their place in the world. Questions such as “Who am I?” and “What do I believe in?” are prominent during times of shock, especially now.

In my weekend training for how to deal with culture shock we partook in multiple classes and watched presentations on how to accept the new culture we were about to encounter.

While in my training on how to cope with culture shock, we were taught that the best way to deal with these questions is to welcome them with curiosity and try to explore our identities in the new culture. This means adapting and coming to terms with the new environment and way of life.

The timeline to culture shock and adaptation to the changing social climate looks different for everyone.

“The first two weeks are generally the honeymoon period. After that there’s up to three months of experiencing the unknown and trying to find your bearings within the new cultural norms,” Hodgson said.

After those few months is what Hodgson described as “coming out the other side” with a new cultural knowledge and understanding. This aftermath of culture shock may result in a sense of happiness, as you finally understand what was once so foregin.

But, this timeline may differ depending on your ability to adapt. If you do not have the means to adapt to online school, a strong support system, the financial support, or anything else that may put you at a disadvantage, this impacts your ability to cope with the changing culture and culture shock.

“Many of us who are already doing well within the dominant culture not only have economic resources for new computers, more wifi, etc, we also have kinship and friend networks that we can call on for additional help and ideas, to get past a difficult time.” Hodgson said. “There can be a learning gap due to these things that makes cultural adaptation more difficult in an online learning world, thus [making] survival difficult.”

Even with the disproportionate effect of culture shock, there are steps everybody can take to adapt to the changing environment of which we are in.

One of the biggest ways we can help ourselves in this change is in acceptance. Hodgson puts a strong emphasis on accepting the situation and realizing that it is a difficult learning process and we shouldn’t be so hard on ourselves.

While abroad, it was important for me to recognize the differences of Argentine culture and try to welcome and accept the diversity in comparison to what I was accustomed to. It was tough at first, but the more time I spent accepting the culture instead of refusing it, it became easier and more enjoyable.

I experienced tough adaptations such as language barriers, different educational systems, and customs that were unfamiliar to me. Right now we are dealing with many of the same issues in regards to educational shifts and culture changes that we have never experienced.

In addition to accepting the situation, we must also recognize that it is not permanent. Ultimately, we will eventually leave the COVID, online school era and go back to a more normal life.