Protests Around the Nation 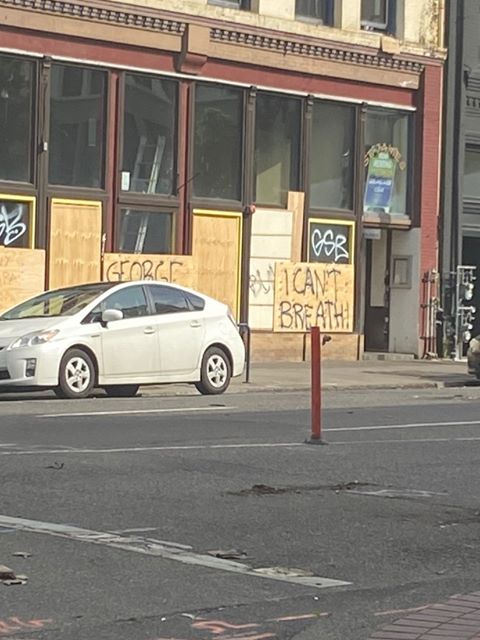 Whether people call it peaceful protests or riots, communities around the nation have seen a summer of unrest.

Sunday marked the 100th day of protests in Portland.

Originally enraged by the death of George Floyd, protests and riots started all across the United States. The invitations would be spread through social media and suddenly thousands of people would be flooding city streets, demanding a change. The hope was to break down the barriers of institutionalized racism. In the

Social media brought a heightened awareness to the younger generation.

“I was kinda like wow. I’ve seen a lot of videos on TikTok of people at the riots. Some of them were horrid. Videos of cops macing children, innocent people. I’ve seen other really heart warming ones, were one police offered kneeled with the protester and stood with them. That almost made me cry. I’ve seen TikTok of buildings being set on fire too,” a local sophomore Marcus Smythe said.  “Because of TikTok I was able to see the world through other people, and experience what was happening. It was the main reason I asked my mom to take me downtown just so I could see firsthand what was happening.”

Smythe expressed that he knew the riots were going to happen “sooner or later,” and that “it’s not really a surprise.” Smythe also talked about the destruction of downtown Portland and the burning of police cars. He believes that they can be rebuilt, but the dead lives of those who the police killed cannot.

An older generation paid attention too.

“I drove past it (the riots) while it was happening, I just felt confused. I was mainly just really impressed. Can’t believe it’s really happening even though I’ve seen it in so many films. It felt like an empty movie set,” Landis said. Landis went on to talk about the millions of dollars worth of damage done to the community.

For Landis it was unfortunate that in Beverly Hills the protests weren’t necessarily protests, but additionally very destructive, something that was done behind the screen of ‘protesting for human rights’.

“I have no idea how this will affect the community. I couldn’t have predicted this happening three days ago, so I’m not going to try to predict what will happen three days from now,” Landis said in an interview on June 1.

Back in Oregon, senior Amnesty Club President Caroline Frisiras was thinking optimistically about the affects the protests will have on the people around us.

“Hopefully, this will all lead to a positive change in our community, and help to unify everyone. I think now more than ever, people are increasingly becoming more socially aware — finding ways they can help advocate, educating themselves on current events and topics, seeking ways to be actively anti-racist, etc. I think that this movement is bringing awareness to current (and past) issues, and hopefully making all members of our community feel valued, comfortable, and respected, both in and out of school,” Frisiras said.

Amnesty Club is a chapter of Amnesty International, which is a non-governmental organization that focuses on human rights. Frisiras talked about how she is uncertain what the future path might look like for this upcoming school year, but is certain that as a community they will be supporting People of Color.

Smythe agreed and commented on his hopes of the situation.

“I was really shocked to be seeing all this, but I only hope I can get more educated and that Black people get the rights they deserve.”