The noctural education of quaranteens 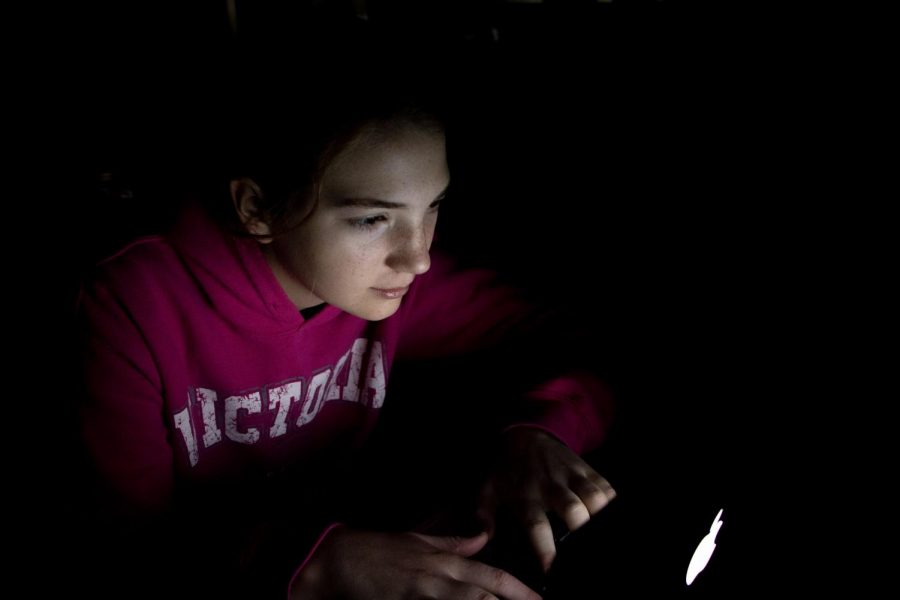 Without a typical school year schedule, teens do work into the wee hours of the morning. Hannah Currier worked on a slam poem for her language arts class, the room illuminated by the light of the computer screen.

Being at home all of the time can definitely throw off students schedules, whether that means when they go to work, or when they do their homework, the agendas have changed.  This also includes the amount of downtime that adults, teens, and children have as well.

A schedule that has changed a lot for most teens is their sleeping schedule.

“Humans require rest of both the mind and body, and this recovery process is through sleep”, said Bill Fish, managing editor of the National Sleep Foundation. He has studied the human body’s neurological reaction to sleep for a little over five years.

“Teens need between 8-10 hours of quality sleep.” Fish said.  He also talked about his usage of the word “need”, and how that proves true, contrary to some public opinion. “It is necessary for [teens’] brains to grow and develop correctly. Sleep serves to reenergize the body’s cells, clear waste from the brain, and support learning and memory. It even plays vital roles in regulating mood and appetite.”

The world is in a changed time with COVID-19 taking over, causing many companies, stores and schools to be shut down. There is a ‘Stay Home, Stay Safe,’ order in most countries, and so one would think that people would maintain a fairly normal sleep schedule with the time they are spending at home. That supposition is not accurate whatsoever.

“I go to sleep typically after 2 a.m., and I try to wake up at 11 a.m., but sometimes I’m not up until 1 or 2 in the afternoon,” senior Jessica Woolfolk said. A prominent member at school, Woolfolk was the president of both the Climate and Service clubs. Her busy schedule had her up early in the morning.

“I don’t really like sleeping past noon, because I feel very unproductive, but all this free time has definitely taken away my motivation to wake up early,” Woolfolk said.  She also went on to talk about different activities she is doing with her family in quarantine, and organizations that she continues to work with, even during this time.

Senior Meghan Turley agrees with Woolfolk that this house arrest has changed her sleeping schedule a lot.

“I normally would consider myself an early riser. I didn’t really sleep in much before this, but now waking up later makes the day go by faster,” Turley said. Additionally, she says that most of her friends have sleeping schedules like hers. It’s normal during this time for people to stay up late working on assignments, playing video games, or binge watching a tv show.

“I know I’m staying up too late and my children wake me up too early,  so I am getting significantly less sleep than I was pre-quarantine. To be the most healthy, we should all try to stick to our pre-quarantine schedule,  but that’s easier said than done,” Biology teacher Geoffrey Jarman said. Jarman thinks that everyone’s sleep schedule is off, not just his.

Yearbook and Tigard Today adviser, Hillary Currier, thinks of sleep schedules changing in a different light than most teachers.

“I wonder if COVID-19 is highlighting how different teens’ times for being creative are from everyone else’s,” Currier said. “Senior Liam Futrell added some really great Tigard Today footage at 2 a.m. yesterday, and when we were working on the yearbook, senior Jessica Miller would work on a page until 4 a.m., and then I would open it again at 6 a.m.”

Don’t be mistaken, though, teachers still feel that it is important to get a full 9-10 hours of sleep, as does Woolfolk and Turley. Fish’s advice?

“Stick to a schedule, try to find some normalcy in your life in these difficult times.  Try to get back to the sleep schedule you had when school was in session, which will make things much easier for next year,” Fish said.

Looking to the future, most people only think about school, classes, or sports.  What’s also important to look at, is the sleep you have to get to prepare yourself for it all.