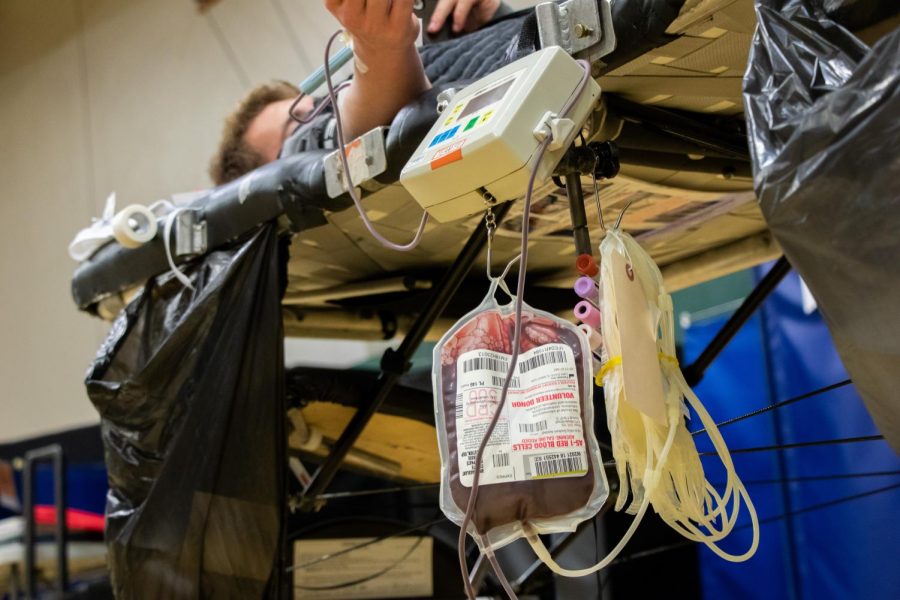 In this archive photo from the 2018 NHS blood drive, a student donates blood. Red Cross blood donations have changed during the coronavirus pandemic, but the effort continued and the supply of blood stayed strong.

Donating blood is an essential activity even during a pandemic.

Due to the quarantine, many non-essential businesses and programs have come to a stop, but the Red Cross continues to collect blood in order to help save lives. I have been working as a volunteer because I’ve always admired what the Red Cross has done for others, and I enjoy being able to get out and meet new people and help them.

Towards the beginning of the quarantine, there was a drastic decrease in blood donors. The Red Cross lost around 700 pints of blood. One factor was that business locations that normally hosted blood drives were closed. But another factor was fear that donating blood might spread the coronavirus.

When Governor Kate Brown banned gatherings of more than 10 people, all bus blood drives were canceled. The majority of drives were traditionally done by bus, but they have transitioned to have blood drives in buildings. Many churches have allowed the Red Cross to use their buildings. The buildings I have worked in are Christ the King Lutheran Church, Calvin Presbyterian Church, the Oregon State Bar Center and an empty building in Bridgeport Village.

On my first day of volunteering, I arrived at Christ the King Lutheran Church. I started volunteering the same week the Red Cross had put social distancing rules in place, so everyone there was learning together. Before quarantine, donors with or without appointments would walk into the building, get checked in by scanning their Donor ID and would wait in a waiting area until they were called to start the process.

As a volunteer I greet donors, ask for their ID, ask for a RapidPass, and give them a name tag and instruct them on where to go from there. I also help manage hospitality. All volunteers under the age of 18, like me, are not allowed to take donors temperatures for legal reasons.

The new social distancing laws added new steps to this. Now, when a donor, usually appointment only, walks in, the volunteers must make the decision on if they can be accepted at that moment or have to wait outside. Then, volunteer donor screeners must take the donors temperature and if the donor has a temperature greater than 99.5, they will be sent home. If they pass the temperature check, they will be given a mask and checked in and asked to wait in the waiting area, an area of the building with chairs all set six feet apart. Then the health screeners will call their name and they will start the donating process as usual.

Covid-19 is not a blood borne disease so people can still give blood. The Red Cross began an advertising campaign to get people to donate blood. Due to this advertising and the fact that many people have nothing else to do due to the quarantine, donations increased—more than the Red Cross could handle at times.

The first two times I volunteered we had about 70 people come in. Our waiting areas were completely full the entire drive, and we had to send a lot of donors home due to time and staff restrictions which caused some conflict, but most donors were understanding and rescheduled. At both of those drives the drive was scheduled to end at 7:15 p.m., but the staff members ended up having to work until 10, due to the amount of donors that had come in.

Having an increase in donors and a decrease in drives causes many issues in the system. All drives have been overbooked, meaning the staff members are unable to take in as many donors as are coming in to donate. The staff members see around 73 donors every day, which is more than they are used to, and by the end of the week they are extremely exhausted. Some have even been calling in sick, not because they’re sick, but because they need a break.

55-year-old Larry Beck is like a celebrity with Red Cross. He is a volunteer who helps manage reception, health screening, and hospitality. Whenever he enters the building to begin his shift the entire Red Cross staff shouts his name and becomes ecstatic. Beck has been volunteering an average of three blood drives a week, even during this time.

“My experience volunteering has been absolutely fantastic,” Beck said. “I enjoy helping out the people who work for the Red Cross and helping the donors have a positive experience donating.”

He volunteers because he enjoys helping people and enjoys being social. He believes everyone should find something to do that helps the community be a better community. The first time I met Beck, he had just brought doughnuts for the entire staff team because he knew they had been working hard. I have been very fortunate I have had the chance to work with him. He made my transition into the new social distancing system simple and fun.

The two major uses of blood in hospitals are car crash traumas and cancer surgeries, but due to the virus, there was a temporary pause on cancer surgeries and there have been fewer people on the roads to get in car crashes. This caused a surplus in blood everywhere. The Red Cross even reached the point where they were having to get rid of the blood that was donated since blood only has a six week shelf life. Despite this surplus, the Red Cross still took blood because now that Gov. Brown has lifted the ban on elective surgeries, people are once again seeking cancer surgeries, and once the quarantine is lifted the number of car crashes will rise once again.

As counties move into Phase 1 of reopening, the blood donation system has started to steady and staff members have become accustomed to their new normal.

For people wanting to donate blood, Red Cross suggests you come prepared with a mask, ID, and have your RapidPass completed. I have enjoyed working with the Red Cross and will continue to do so. I have had the chance to meet hundreds of people and interact with them in a positive way while also helping others. The staff have become my friends and it’s an overall fun and safe environment to work and donate in.