Senior Jack Fisk speaks about their experience in Tigard's CE2 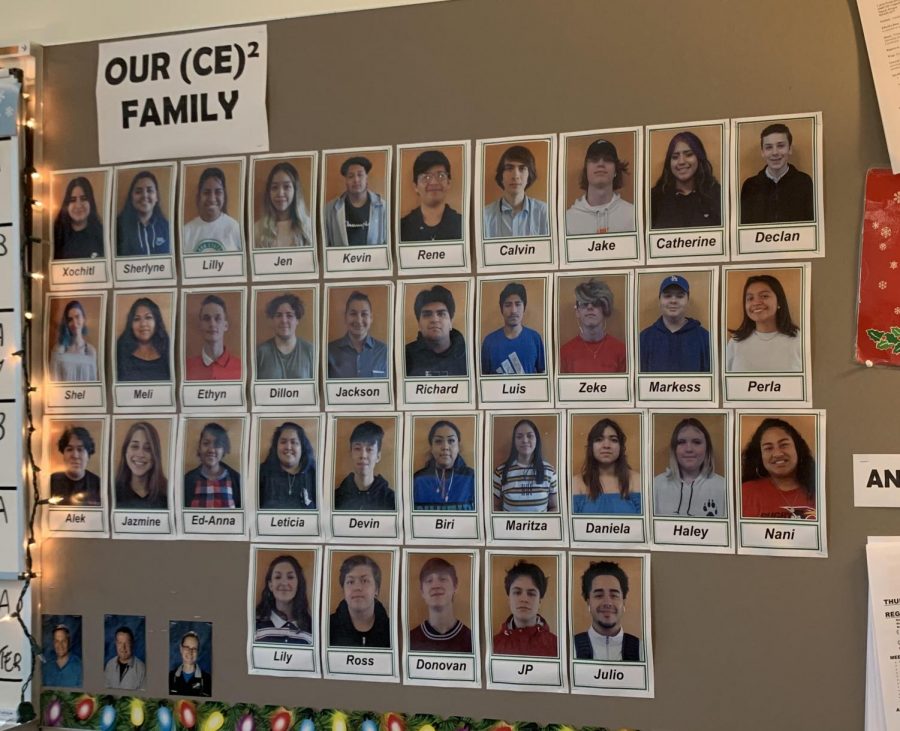 Pictures of students currently participating in the CE2 program is displayed on the wall in their classroom. A new CE2 space was included in the new North Wing of the building.

Senior Jackson Fisk has attended Tigard High since their freshman year. Over the past three years, Fisk came to discover that the traditional schooling system didn’t work for them. Fisk had an easier time with academics in middle school, but once they hit high school, things started to pile up. Fisk struggled as they were met with unfitting grades, and slowly things started to slip through the cracks. Then, their counselor offered an alternative education system: CE2. “CE2” stands for “Community Experience for Career Education.”

The program began in 1973 as a Northwest Regional Educational Laboratory project. It was later adopted by the Tigard-Tualatin School District, and now serves both Tigard and Tualatin High. Through CE2, students are given opportunities to learn about having a career as well as engaging in community service, while also earning high school credits.

Students usually hear about the CE2 program through their counselors. Counselors who notice their students struggling may direct them to the program’s section within the Tigard-Tualatin district website. If, upon reading the information and filling out the application, they decide they’re interested, they’re set up with an interview with Learning Director Scott Scribner and CE2 Director Tony Hunt, accompanied by their parents.

Fisk said that the process was quick moving. First, they were given paperwork to sign. It was like a contract with many of the rules of the program.

“Here’s this thing, and you need to agree to all of it if you want to be in CE2 and I had to get that in within two weeks,” Fisk said. “It was like a consent to drug testing. That’s the first thing they do. They can’t really send you out working places representing the high school if you’re on drugs.”

The staff in the CE2 program are always there to help their students succeed. They have Learning Director Scott Scribner, the CE2 director Tony Hunt, and the secretary Liz Wood. The students in the program are split between the directors. Tony Hunt is the one who is currently working with Fisk.

Instead of going to classes on a daily basis, students will be taken on a bus to their internship.

“Everyone starts off with a teaching internship. We’re at the elementary schools where essentially you’re a teacher’s aide. You help out with managing the kids and getting them from to and fro,” Fisk explained.

From being a teacher’s aide at an elementary school to cleaning dishes for a catering company, there are many different areas students can cover in the workforce. While following the rules of the CE2 program, they work at each internship with local businesses for about a month before changing. It functions like a job in the working world. Not showing up to work could result in being fired, and students have a supervisor in charge of them. Students are expected to give it their all.

To earn high school credit they still need to graduate, the students complete packets with the information they would gain in a traditional class. They have a semester’s worth of work compressed into 30-page packets. They’re given about two weeks to complete each one, but it’s based on each person’s learning style. They are given one day a week in the center to complete them.

The packet work is the same information or required curriculum content that would be learned within a classroom setting, but students are able to work independently and at their own pace, which leads to more success for these students than the original system.

Senior Ethan Batchelor, another CE2 student, has been hard at work on packets of his own. “I just finished government and a year’s worth of history. So that was nice,” Batchelor said.

In addition to their internships and packet work, they have a volunteering requirement. According to Fisk, “you have to get at least five hours of community service each quarter.”

Like their schoolwork packets, they have a green packet where they write down the days and activities they do for volunteering. They need the signature of the supervisor for the event they’re volunteering for as well as their own signature. After that they’re required to write a reflection on the experience. They reflect on how it made them a better person and how it improved their community.

“You have five volunteer hours throughout the community. I just did a tree planting thing for the community,” Batchelor said.

The program has been a success for Fisk so far this year.

“I didn’t go to school, felt totally drained, and [would] be falling asleep,” Fisk said of their junior year. Senior year in CE2 has been very different.

“The second I’m at my internship, a really bad day will get so much better. Even if I’m just cutting meat or cleaning trays or doing the dishes it just feels so much better,” Fisk said.

The freedom that comes with the program has helped them a lot. They are looking to gain a career within the culinary industry. At the moment, they’re interning for a catering company called DeAngelos.

“Like most students, Jack was a little unsure of themselves at first, but from what I’ve seen from Jack, their confidence has really blossomed,” Hunt said.

Sometimes for one reason or the other the school system doesn’t work for everyone. Programs like CE2 allow for students to live out their potential in an environment that works for them. To be successful, some students need to sit at a desk, consult with their friends, and listen to a teacher. Others need to hit the ground running and get their hands dirty. CE2 offers a place for them to do that.