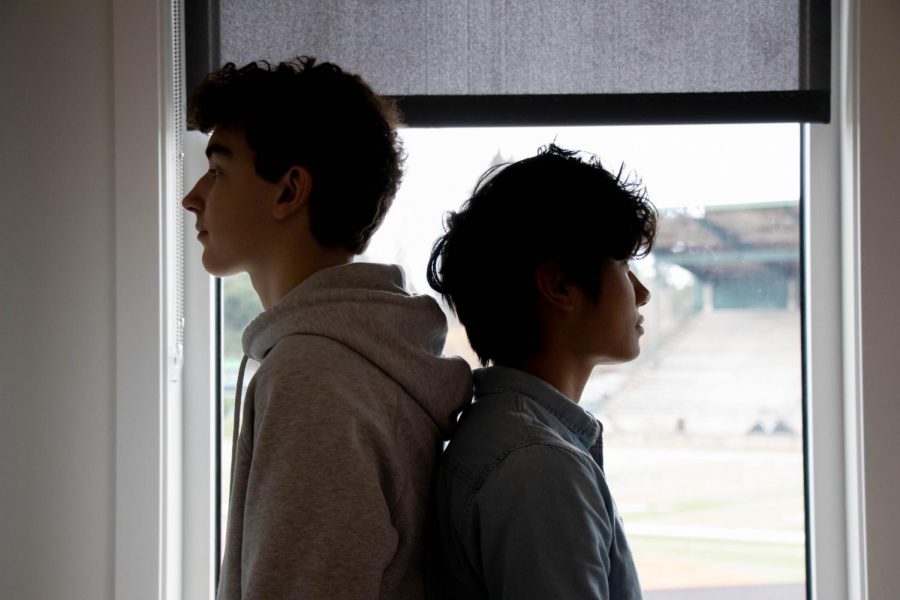 Sophomore Owen Kosmala and Noah Vu both have similar haircuts, but Vu has a perm and Kosmala's hair is naturally curly.

Perms were once fashionable among women in the 1980’s, but today many teenage boys have taken over the trend and made it their own. The new “man perm” look consists of longer curly hair at the front and shorter straight hair faded in the back.

A perm is a hairstyle of waves or curls set into one’s hair that remain permanent until cut off. A perm is created by wrapping the hair in rods and applying perm lotion. Perms can cost anywhere from $30 to $130 to style, depending on the length of the hair.

The return of the perm can mainly be seen in the sophomore crowd.

“I was tired of managing my hair, and I knew that if I got a perm it would be less time-consuming,” sophomore Noah Vu said. Vu received an at-home perm done by his mom.

“When I first got my perm mostly everybody liked it, and I barely got anybody that didn’t like it,” he said. Vu is happy with how it turned out and is planning on “re-perming” his hair in the future.

“I loved giving Noah a perm because I did something that I knew he really wanted,” Vu’s mother Kristi Huynh said. Huynh learned how to style hair when she was a teenager in her mom’s salon.

“I don’t think much about perms,” history teacher Murray Carlisle said. When asked why he thought they became popular, Carlisle said it could be “because people like to look like poodles.”

“A lot of the times, if it’s a perm, you can tell because they sometimes do a pretty bad job on it,” sophomore Levi Vorvick said.

Sophomore Martin Unzueta had a perm toward the end of his freshman year and beginning of his sophomore year.

“I did have a perm because I liked the look of having curly hair,” Unzueta said.

Unzueta does not plan on getting a perm again. He believes others got perms because he did and because they saw them and found interest in them.

Sophomore Owen Kosmala has naturally curly hair that sometimes gets mistaken by others for a perm. “It’s kind of annoying because everyone thinks I have a perm, but for the most part, it’s whatever,” Kosmala said. He believes straight hair is boring. “They wish they could look as good as me.”

Rebecca Walters is a hairstylist at Hair Plaza in Tigard who has given many perms. “People who want perms are usually people who want easy care,” Walters said. “There are a lot of gentlemen that get perms, even teen guys.”

“I have seen an uptake in perms,” Vu said.