TikTok: fun for some, trouble for others 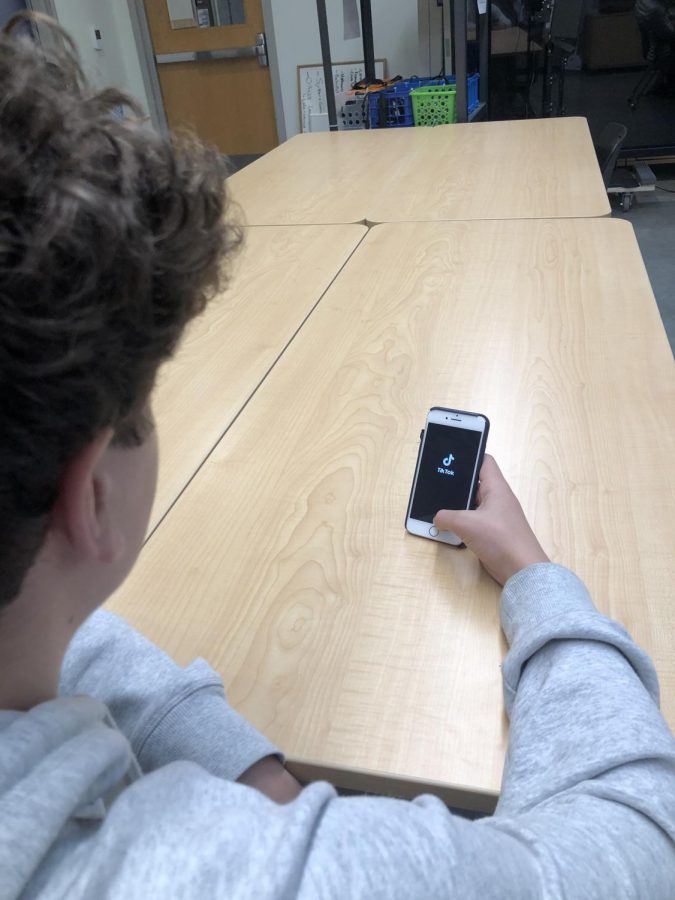 Owen Kosmala signs into TikTok in the pubs room. Kosmala spends 10 hours a week on TikTok alone, surpassing his Instagram and Snapchat use.

What was once an app that many downloaded as a joke has now become an online obsession.

TikTok, an app for creating comedic and entertaining videos, was launched by the company ByteDance in September 2016. Since then, Chinese developer and ByteDance founder Zhang Yiming has built a fortune of 16.2 billion dollars from the app, which has taken the online viral video community by storm.

Before TikTok, ByteDance owned a lip syncing app named Douyin which was similar in function to another app named Musical.ly. Musical.ly was well-known for about two years but its popularity began to diminish midway through 2016.

Yiming saw this happening and took advantage of the opportunity. In 2018, ByteDance’s Douyin merged with Musical.ly which resulted in the new app TikTok. The social media app was primarily made for people to share their lip syncing and dance videos online, but users could also submit whatever type of video they wanted to be shared with the world.

Soon after its release in August 2018, TikTok’s popularity rapidly grew and by September of the same year it had received more downloads than some of its competitors like Instagram and YouTube, which had been on the market for several years prior.

Sophomore Owen Kosmala decided to make TikTok videos as a joke after seeing so many videos that were not funny. He also claimed that he does not think it is that distracting; however, after checking his screen time, he realized that he spends more time on TikTok than Instagram or Snapchat. Owen spends about 10 hours per week on TikTok alone.

As TikTok grew and as more videos were made, more users started to become famous as their videos went viral, including students from Tigard High.

Senior Owen Switzer had one of his videos posted on the “For You” page of the app. “The attention was really nice,” Switzer said. “It was cool to get that many views and likes because my friends and I didn’t think it would do well.”

Sophomore Jamie Toda also had one of his recent videos go viral on the app. “I made a video for fun and a lot of people ended up viewing it,” Toda said. She was also happy that her video didn’t receive any hate or bad reactions.

TikTok is a great way to make new friends and find funny or relatable videos. However, it is also heavily polluted with insensitive videos regarding gender, sexuality, race, and self-discrimination.

“I do think there’s content on TikTok that does attack certain races or genders which are based on stereotypes,” senior Emma Vu says. “I think if people see jokes that are truly offensive they should report it and TikTok should review it and get it figured out.”

Some of the most popular accounts on TikTok even contain videos of people mocking disabilities such as schizophrenia and autism.

“I like TikTok because there are really funny videos, but I don’t like that it’s a platform where you can spread hate really easily,” sophomore Janet Polanco said.

Although TikTok attempts to remove all videos deemed offensive, there are unfortunately too many to remove them all. Some people are afraid to report videos because they do not want to be called “too sensitive” and “lacking” of a sense of humor. In order to avoid criticism from others, many choose to scroll past the hurtful videos rather than speak out.

With every popular social media app there are just as many cons as there are pros, and TikTok is no exception. TikTok’s immense popularity means that though it is a great way to connect with others from around the world, people should still be cautious of the content they post and view online.