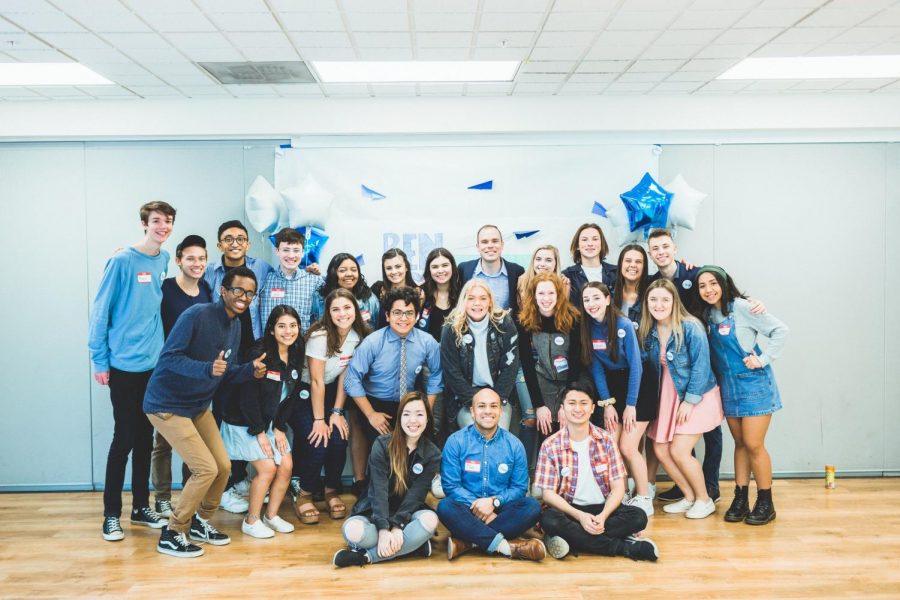 Students from both Tigard and Tualatin have been involve in running and organizing this student led campaign. The students stand with Ben for a photo after a meeting about the campaign. From left to right, pictured are Ava Melson (TuHS), Kavi Shresta (THS), Matthew Brown (TuHS), Ben Bowman, Abdirahim Mohamoud (TuHS), Lupita Ruiz, and John Frudenthal.

Ben Bowman  won the School Board election taking over 50 percent of the votes in the election on May 21.

There is a shift in the attitude around how elections are being run. Students that are not legally of age to vote are running campaigns nationwide and are influencing the voters to support their campaigns. The student-led campaigns have become more and more popular as passionate students are taking charge of local campaigns to sway the community in their favor.

Bowman was able to recognize this and used students from both Tigard and Tualatin to put together a winning campaign. By making the students a centerpiece in his campaign, he used their energy, ideas and opinions to create the best campaign.

“It’s encouraging to see students get involved in the democratic process and to see the impact that their involvement can have, I’m encouraged by the young people that will be the future leaders of this country,” Government teacher John Weber said.

Bowman capitalized on the students grassroots campaign tactics as he successfully won the three-person race for Seat Two against Gigi Olguin and incumbent Terri Burnette.

The campaign started with a handful of students, initially meeting in Symposium coffee for the first time in January. Every weekend since then, they’ve been meeting to work on the campaign.  Students involved in the campaign are in charge of planning the campaign and organizing everything that it takes to make a successful campaign. “Our campaign started off with just a couple of us students that had known Ben for a while, getting coffee in Tigard, and talking about the prospect of a campaign and what it would look like,” Tualatin junior Matthew Brown said.

The campaign has now grown to over 25 students with more and more students coming out each week to be involved.

Students on the campaign have been meeting weekly to develop campaign platforms from a student perspective.

“In the era of student voice leading the country, from Parkland to the Juliana plaintiffs, seeing that same energy from students in our district is incredible and I’m honored to be a part of it,” Brown said.

Weber also noted the energy and how students know their schools better than the adults do.

“Students care about schools, they know what’s working and what’s not working. The energy students have really helped this campaign,” Weber said.

They have organized events like house parties to raise money for the campaign. “Every meeting and canvassing day is filled with so much passion and determination,” Tualatin senior Bailey Langley said. Students have also spent hours canvassing on Saturday afternoons week in and week out to spread the word about the campaign door to door.

A campaign takes a lot of work to get going so having so many students involved has made it easier to achieve their goals in getting this campaign going. “Having a student-led campaign is so much more fun and energizing than a traditional campaign. All campaigns are a grind, so going through the process with optimistic, young people that bring positive energy makes things way better,” Bowman said.

The campaign is centered around the students as they are responsible for all of the core functions running the campaign entails.

One of Bowman’s main goals is to elevate student voice which is the reason for the student-led campaign. “I also have the goals of elevating the voices of students into policy making conversations and getting students excited about being involved in civics,” Bowman    said. Some of his specific goals are to create smaller class sizes which will help students get individual instruction and attention to get the most out of their education and, a well-rounded education, making extracurricular activities available to every student to improve their wellbeing and academic achievement.

The campaign kick-off party, hosted at Juanita Pohl Center on Saturday March 16, was a way to get the community involved. Student interns spoke at the event along with Bowman   .

The campaign used community events and word of mouth to draw attention from the public. “The community has shown its support by listening to students and the campaign… They’ve listened and have started to include us in conversations,” Langley said. The community has been a large part in the success of this campaign. “As this campaign is for the students, by the students, parents, teachers, and students are taking notice,” Tigard junior Kavi Shrestha said.

Having the community involved and keeping them up to date has been a main and central focus for the campaign. “My first goal is to talk to the community about the ideas and experience that I bring to the table as a candidate. That’s the core function of most candidate campaigns,” Bowman said.

For the students, the campaign has been an eye-opening experience into what the school board is and why it matters. “Before working on his campaign, I did not know or frankly care what our school board was. Ben’s campaign has taught me most importantly that school boards matter,” Brown said.

Students learned from the campaign. “You are never the only person in a community that is looking to create change or start a conversation about something, so don’t be afraid to step up and voice your thoughts. Ben and the campaign team has shown me just that,” Langley said.

These students have also learned how important their voice is but they have also learned how to really listen from Ben. “I have learned just how much of a difference it can make to truly listen to others and stay true to yourself. Ben is a spectacular guy and his always positive attitude and willingness to hear different perspectives is truly special and I have learned just how much of an impact that can have,” Shrestha said.