What’s all that laughing during class?

It's just publication students trying Van Fleet's favorite ice cream. Warning: you might not want to try this at home. 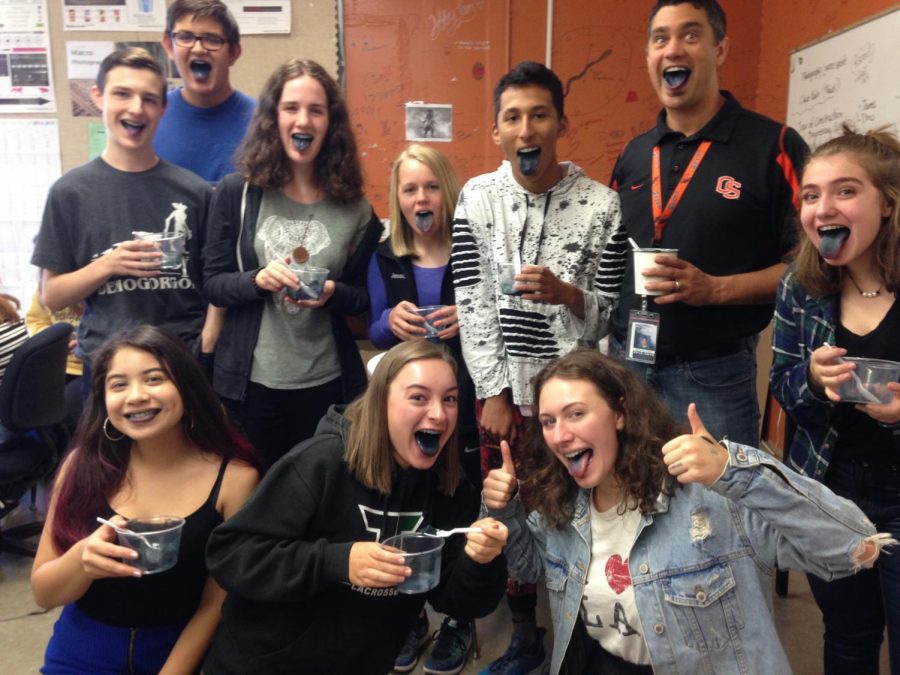 Publications students and Principal Andy Van Fleet show off their tongues after trying black licorice ice cream during class. Van Fleet said it was his favorite flavor so publications put it to the test.

In preparation for an upcoming feature on Principal Van Fleet–we’re calling it a Van Fleature–writers junior Katelyn Wilhoit and junior Olivia Niemi made an odd discovery, that Andy Van Fleet’s favorite ice cream flavor was black licorice. While it’s an unconventional choice for an ice cream, the writers still wanted to try it out to see how anyone could like it.

Nevertheless, she thought that doing some serious journalistic research was necessary, so she drove to Lake Oswego Ice Creamery and picked up two pints.

“[It] looked really disgusting,” she said.

It was jet black, having the same brightness of pen ink. In fact, it looked just like pen ink.

While Currier scooped up some bowls of ice cream, she asked Van Fleet to tell the class how he came to like the strange dessert. He explained that, when he was a kid, his family would take frequent trips from his hometown of Klamath Falls to Medford to shop, play baseball, etc. It was on one of these trips that he and his brother discovered the ink-black treat.

“There was a place in White City that just had tons and tons of ice cream flavors,” Van Fleet said. “My brother and I got black licorice ice cream one day, and we realized that it turned your whole mouth black. We’re spilling it all over ourselves, laughing and realizing that, not only does it taste good, but it stains your whole face!”

From that point on, Van Fleet and his brother would always order black licorice ice cream on every family road trip.

For some students, the flavor of Van Fleet’s favorite ice cream was a pleasant surprise. Senior Allegra Wesson and junior Bonifacio Yuzon both liked the ice cream, agreeing that they would try it again if they had the chance.

“It was stellar,” Yuzon said, “I moderately enjoy black licorice, and black licorice ice cream had such a creamy flavor and texture, that’s much more reminiscent of a really good vanilla.”

“It really was just a pleasant surprise,” Wesson added.

For other students, the black licorice tasted just as Currier described its look–absolutely disgusting.

Wilhoit, had a negative reaction.

“I gagged,” Wilhoit said. “I regret eating it, and I tried it to see why it was Andy Van Fleet’s favorite ice cream. I still don’t understand.”

At the end of the day, despite all the black-stained teeth and tongues, Currier was happy about two things–the unity between her students and the laughs they all shared.

“When my class started laughing so hard, and when everybody’s mouth turned black, I realized that black licorice ice cream was now my favorite flavor ice cream too. Not because of how it tastes or how it looks, but how it makes everyone happy.”

Currier thought everyone would always remember the first time they tried black licorice ice cream, and as much as she hated to admit it, Van Fleet was right.