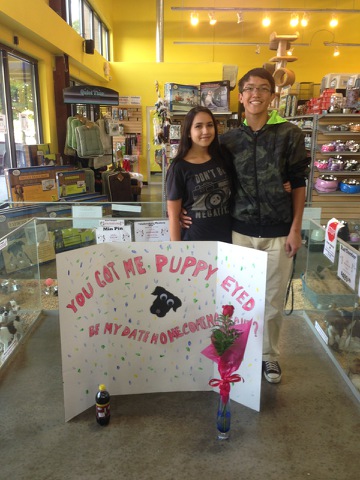 Sophomore Justine Wetten and junior Isaac Beale pose with the poster used to ask Wetten to homecoming inside of Critter Cabana.

As homecoming gets closer girls are running around looking for a dress and shoes while guys are whipping up creative ways to pop the question, “Will you go to homecoming with me?”

Freshman Teagan Langseth-Depaolis spent her Wednesday afternoon working in the Templeton Elementary kindergarten, expecting nothing but a normal day. When a peer asked her to go outside of the classroom, she was met by 11 kindergarteners who spelled out “Homecoming?” and held one pink rose each. Freshman Lucas Smith standing at the end of the line with his own rose.

“It was so adorable,” said Langseth-Depaolis.

Inspired by a post on Pinterest, senior Megan Bither took the lead and invited her boyfriend Tigard graduate Peter Wright.

“He was surprised,” said Bither. “that was fun that he didn’t see it coming.”

Bither went to his house and propped the poster on his car so it would be seen before he left for work. 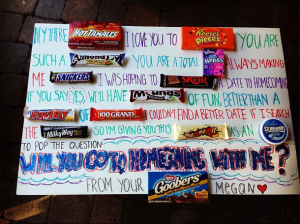 After a long night of Tigerette practice, junior Maddie Jean was surprised by Southridge junior Ryan Maza. Pulling into her driveway, Jean saw “HC?” spelled out in bright purple glow sticks on her garage door. Maza appeared with a bouquet of red roses and Jean gladly accepted the offer.

“I was so surprised,” said Jean. “It was so cute and I have never seen glow sticks used by anyone before.”

Sophomore Justine Wetten was in for a surprise when junior Isaac Beale took her on a spontaneous trip to Critter Cabana after school. As the couple entered the popular pet store, Wetten walked in to see a large sign reading “You got me puppy eyed, be my homecoming date?” across it along with a single red rose.

“So?” Beale asked, awaiting a response.

The couple hugged it out and a Critter Cabana employee took a picture of them with the setup.

“It was the cutest way I’ve ever been asked to anything,” said Wetten.

These girls got asked just in time for homecoming, which will be held on Saturday, October 19.